Everyone loves the coronapocalypse

Impossible to tell what direction coronavirus will take, says WHO

US flu season arrives early, driven by an unexpected virus 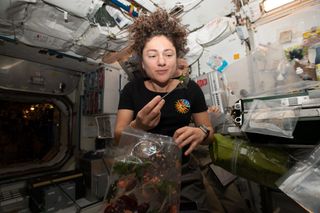 As astronauts harvest and munch on mizuna, or Japanese mustard greens, aboard the International Space Station, the future of humans growing their own food in space grows brighter.

In 2015, astronauts aboard the space station grew a crop of red lettuce — the first food grown in space. But “space food” and the prospect of growing viable crops and plants in space has been in development for some time.

“For many years,” NASA plant physiologist Ray Wheeler told Space.com, NASA has “been interested in growing plants as a bioregenerative approach for life support, and the plants would provide food and oxygen and could remove carbon dioxide.”

Now, with the new experiment Veg-04B with the Vegetable Production System (Veggie), a plant growth unit on the space station, this capability has taken another big step forward. The experiment is testing how the quality of light and fertilizer affects the microbial safety, nutritional value and taste of a mizuna crop. And this past week (on Nov. 13), astronauts Jessica Meir and Christina Koch completed the second of three harvests of this mildly tangy, leafy vegetable.

As the space station’s Twitter account shared on Nov. 18, “A portion of the leaves were consumed by the crew while the rest were stowed in a freezer for later analysis on Earth.”

Harvest 2 complete!🌱This past week @Astro_Jessica and @Astro_Christina harvested Mizuna grown aboard the @Space_Station. A portion of the leaves were consumed by the crew while the rest were stowed in a freezer for later analysis on Earth. Learn more: https://t.co/0piugN4nvr pic.twitter.com/HgFR8ESPdHNovember 18, 2019

Ultimately, the goal of experiments like Veg-04B is to create reliable and sustainable food production in space. Theoretically, future human settlers on Mars and the moon could grow at least a portion of their diet themselves. This would provide fresh, crunchy produce with optimal nutritional value for astronauts and make it so that they wouldn’t have to rely entirely on supply missions from Earth.

“Over time, that packaged diet … it loses quality and it loses nutrition. Some of the vitamins will degrade,” Gioia Massa, principal investigator for Veggie, told Space.com. Additionally, while astronauts on the space station have access to food regularly sent via cargo missions, “astronauts tend to lose weight,” Massa added. “We think that this weight loss is due to menu fatigue, and so we postulate that adding fresh produce to the diet could help with that.”

By continuing to experiment with new crops in the microgravity environment on the space station, researchers can see how, like with the mizuna, plants retain their nutritional value and taste, and also how they grow. With controlled experiments on Earth, scientists can get a good sense of how new types of plants might grow in space, but they can’t know for sure how they will develop over time until they are up on the station.

Now, while mizuna is a leafy green like the red lettuce first grown in space, Massa explained that they have big plans for upcoming space crops. She said that, while they started with leafy greens, they plan to move on to tomatoes, peppers, nutrient-packed microgreens and more. Wheeler added that eventually they might even grow small fruits like strawberries with dwarf fruit trees.

Massa said that they do consult the astronauts about what crops they would like to grow. And, surprisingly, while many have suggested foods like corn, she said, others have suggested flowers. For now, while they develop experiments with new crops, Massa said that they are considering, in the future, sending up a variety of seeds that could be in stock and available to the crew, so that they could select what they want to grow on orbit.

Join our Space Forums to keep talking space on the latest missions, night sky and more! And if you have a news tip, correction or comment, let us know at: community@space.com.

Microsoft: Linux Defender antivirus now in public preview, iOS and Android are next

PS5: Sony abandon GDC 2020 and PAX due to coronavirus epidemic

Type 2 diabetes: Include this type of nut in your diet to lower blood sugar

Coronavirus: 2 in Utah being monitored after trip to China

A deadly virus is spreading from state to state and has infected 26 million Americans so far. It’s the flu