California to apologize for internment of Japanese Americans

What You Eat Has Rapid Effects on Sperm Quality

As I described in my recent Intel (NASDAQ:INTC) 5G article, networking infrastructure is a $5 billion business today for Intel (becoming the largest silicon provider in Q3’19) in a silicon market that will grow to $25 billion or so in the next few years.

Intel is taking share today on 3G and 4G via what it calls the “cloudification of the network”, which refers to deploying standard Xeon CPUs instead of custom chips. This drives a total cost of ownership (TCO) reduction for telcos and benefits Intel. This will only accelerate in the 5G era. With Intel’s recent announcement, it also entered the base station segment of networking infrastructure with its x86 architecture and already expects to reach 40% market share by 2021, becoming the largest silicon provider for base stations also.

As an x86 silicon vendor, clearly this would also be an opportunity that is of interest to AMD since so far it has not pursued that segment of the data center. Indeed, that is just what the company announced. As seems to be AMD’s way of operating, it will likely try to do this via the core count race it has created with its Epyc series.

This announcement has several market implications.

For Intel, it’s now finding itself under serious attack in yet another market. Clearly AMD is intent on competing with Intel in many of Intel’s markets now that it has a competitive Zen architecture.

How successful AMD will be in this segment is difficult to tell. I would be inclined to believe that AMD’s uptake in networking will be (even) slower than the 5% market share it has earned after 2.5 years in the data center with Zen. This is because of the partnerships and more specific software that is run in that space. For example, I described how Snow Ridge has several specific network acceleration technologies built-in. I am not aware that AMD has those. Nevertheless, it seems AMD already has a partnership with Nokia (NYSE:NOK), although Nokia seems to be partnering with pretty much everyone.

Intel to quite some extent also leverages its low-power and lower-cost Atom architecture in this segment. AMD may be unable to compete with this with Epyc. For this segment, Intel also has its lower power Xeon-D lineup. While based on the standard Xeon Scalable silicon, such specific solutions may continue to give Intel an edge.

But in the longer term, this does improve AMD’s total addressable market (TAM) and could take some share and drive incremental revenue growth from its existing Epyc investments. Related to the software aspect, it could be said that AMD profits from Intel’s pathfinding investments in this space to drive software-defined networking on x86.

Intel should not be too worried yet as its own market share is far below the 95% or so it has in cloud and enterprise: as I described, $5 billion revenue in a $20+ billion segment.

Interestingly, there is also a second implication for this announcement. As mentioned, AMD announced it was on track to reach 10% market share by the second quarter of this year. This, seemingly, would be up a lot from almost 5% market share in Q4 as it was also announced quite recently by Mercury Research.

However, this by itself is a misleading statement, as not all market shares are created equal. Intel announced in one of its 2018 earnings calls that it had delivered 8 million CPUs that quarter for the data center in a yearly TAM that it saw of 30 million units.

By contrast, the 10% market share that AMD announced was based on a TAM of 20 million units (as reported by IDC). This seems to be due to AMD not participating in several segments of the data center such as networking and leaving those out. But this clearly inflates AMD’s market share by 1.5x.

Now, with AMD’s FAD announcement of intending to pursue the whole data center, it ought to use the full TAM. So using Intel’s 30 million unit TAM number, AMD really announced it was on track to reach 6.7% market share in the second quarter.

Although an improvement from less than 5% in Q4, it is much smaller than it may have seemed.

Admittedly, it is also just a percentage. From a financial perspective, AMD still reports its data center business as part of its semi-custom business, so it is difficult to know how much revenue it exactly generates. The Next Platform has estimated it at a $1 billion forward run rate, which implies about $250 million per quarter. On the other hand, Q4 was just the second quarter of the second-generation Rome’s ramp, so there may be room to grow to a “real” 10% market share in 2020, but that may not occur before Q4 or even 2021.

AMD’s share price declined like most of the market recently. Near term, there are two opposite drivers. On one hand, the economic recession will likely impact many businesses. On the other hand, the work from home paradigm is driving an increase in networking demand, although this might not necessarily be for 4G/5G. But as AMD’s telco business is literally in its early days, this likely won’t be material to that part of AMD’s business.

Longer term, I see this AMD “bomb” as being supportive to its long-term target of 20% annual revenue growth and 50%+ gross margin, which the company also disclosed at its analyst day: since this is a new business that will generate incremental revenue likely at above corporate average gross margin since it is part of the data center.

However, at the current time into this announcement, it is likely too early to tell how much of an upside this new business will bring to AMD. But for investors, it may be significant to know that AMD has entered a new $20 billion market.

From a stock price perspective, AMD is trading at premium valuations already, so much of its future financial performance likely has already been priced into the stock. 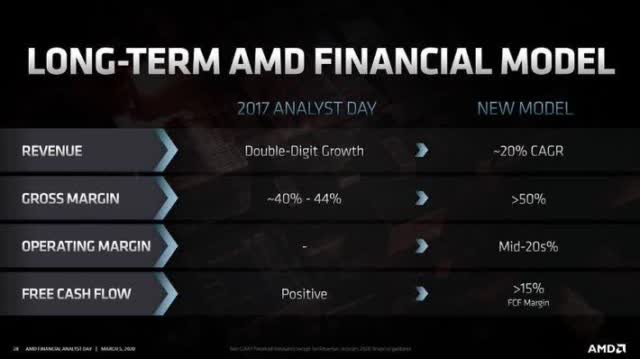 AMD announced a long-term target of (above) 20% annual revenue growth. It likely intends to accomplish this by taking share from Intel, as well as entering new market segments.

To that end, AMD announced it would now also go after the networking infrastructure segment in which it was not previously active and has announced a partnership with Nokia. AMD is now pursuing the whole data center going forward.

While AMD may benefit somewhat from Intel’s investments in the last decade to make the “cloudification of the network” on standard Xeons possible, AMD as of yet may lack some of the specific investments required to be able to fully compete with Intel (for example in base stations). A lot of AMD’s current momentum is also based on its advantage from Intel’s 10nm stumbles, but AMD’s telco business won’t have a similar advantage as it ramps within the next few years.

Its networking announcement likely won’t have much of a near-term impact, although it provides AMD with a highly increased TAM (+$20 billion) via a modest additional investment cost as it leverages the Epyc/Zen architecture.

For Intel, in the near-term this likely is not going to change much, as the company itself is still on a path of major market share gains in the networking segment.

Further, AMD’s expansion into telco is in conflict with its 10% market share by Q2 announcement. AMD has based this on a 20 million unit TAM, while Intel says the data center is a 30 million TAM. AMD now going after the whole data center opportunity means it should use the full TAM, which reduces its Q2 market share apples-to-apples to 6.7%.

Investors should be aware that AMD’s data center is not ramping as fast as it may have seemed, given its misleading market share statement. Although, if it is closing in on a $1 billion revenue run rate, then AMD’s data center is becoming a more substantial portion of its overall business.

Ultimately, it may be more meaningful to look at this segment’s overall growth rate rather than at market share. While AMD does not disclose this, Intel did forecast an increasingly competitive environment throughout the year.

Disclosure: I/we have no positions in any stocks mentioned, and no plans to initiate any positions within the next 72 hours. I wrote this article myself, and it expresses my own opinions. I am not receiving compensation for it (other than from Seeking Alpha). I have no business relationship with any company whose stock is mentioned in this article.

How To Get Invited To The Valorant Beta

All about Clubhouse Games: 51 Worldwide Classics

Suicide following presentation to hospital for non-fatal self-harm in the Multicentre Study of Self-harm: a long-term follow-up study

Department of Homeland Security at risk if Secret Service moves back to Treasury: ANALYSIS